The first delivery of equipment has landed at CBCF quarters in Addis Abeba. Complete set of plastic surgical instruments has been bought, shipped and stored. Dr. Einar Eriksen is very satisfied with this delivery  and looks forward to proper use of the instruments.

Remaining equipment has been purchased. The equipment  is preliminary stored in Stavanger and will be shipped shortly.

28. December 2014
Equipment packages have been ordered from different suppliers during the fall of 2014. The equipment will be shipped to Addis Abeba in December '14 or January '15 and will be installed in CBCF premises in the new hospital. "The Rotary OR" will be completed in 1st quarter of 2015.

Rotary label to be mounted

1. December 2014
We have ordered a nice sign/label that will be mounted above the door to the OR.

The project presented for RI President Gary Huang in Oslo 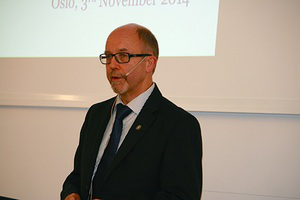 3 November 2011
Our Field Day 28 August has been presented in the Rotary Magazine "Rotary Norden" nr 6 oktober 2011. Please read the article (in Norwegian) HERE.

15 June 2011
Our Matching Grant project was presented at the District conference 2270/2275 in Bodø, Saturday June 11. Arne Markussen presented the Rotary part of the project, while Hans Petter Schjelderup presented theh cooparative Children's Burn Care by audio link from Harstad. Hans Petter could not be present in Bodø since "Walk and Run" was arranged in Harstad the same day.

19 May 2011
The Rotary Clubs of Harstad will arrange a fund raising day in the local "Folkeparken". Sunday 28th August 2011. This get-together was arranged last year with 2000 visitors.

Since our MG project is fully completed, the funds will be directly adressed to CBCF.

5 January 2011
We are happy to announce that all contributions from The Rotary Foundation as well as Harstad Syd RC, Harstad RC, Molde RC, Jimma Central RC, D2270, D2280 and D1440 now has been paid to our project account.

By this, the projects fund raising activities are completed and we look forward to the implementation phase in cooperation with Children's Burn Care Foundation.

10 December 2010
We are happy to announce that all required contributions from host club Jimma Central, International supporting clubs Harstad Syd, Harstad and Molde have been fully completed. All contract issues with respect to TRF are clarified and signed. Fund from TRF (DDF) should be arriving on our project account in a few weeks. We look forward to the implementation of our funds in Ethiopia. This activity will be initiated in a few weeks. 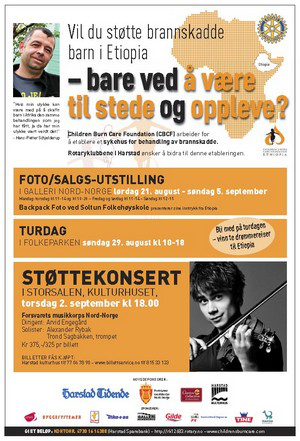 8 July 2010
We are pleased to announce that our project for Children's Burn Care Foundation Ethiopia has been approved by The Rotaryb Foundation. Our local activities planned for August/September has been given a nice boost!

6 April 2010
We are happy to announce that we have submitted a revised Financial Plan (without TRF support) for the project within the given deadline 31 March. Humanitarian Grants have ackowledged the receipt of this document under file number Matching Grant #72186. The application is therefore ready for approval process and final decision

English Summary:
Our January INFO can be also be downloaded in pdf format

15 December 2009
We are happy to announce that we have recieved an Acknowledgment Letter for our Application. The project has been given a file number Matching Grant #72186. This means that the application has reached stage 2 in process and is ready for review and decision.

07 December 2009
On behalf of Primary Host Club, Jimma-Central RC of District 9200 and Primary International Club, Harstad Syd RC of District 2270 as well as other clubs, districts and partners, we are proud to inform that Application for our Matching Grant project “Operating equipment for pediatric burn care unit” has been submitted today. The project will be carried out in close cooperation with our partner, Childrens Burn Care Foundation of Ethiopia.

19 October 2009
Initially, Addis Abeba Bole RC of Ethiopia, was selected to be "Primary Host Club". The project plan was created in close cooperation with this club and Childrens Burn Care Foundation.

However, Addis Abeba Bole has been vary active the last years, thus the number of active project in this club exceeds 5, the maximum number of simultaneous projects that can be managed by one club. 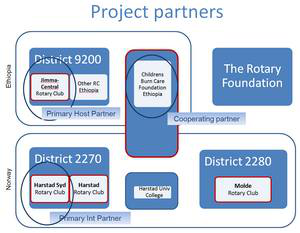 Through contacts established by Club President of Addis Abeba Bole RC and Einar Eriksen of CBCF, we are pleased to inform that Jimma Central RC of Ethiopia has taken over the role as Primary Host Club.

This process has also caused a minor delay in completing the final MG application. This will be completed shortly and within next deadline, December 1. The delay does not have any consequence as to the general progression of the long term project for CBCF. The funding situation of Matching Grant does not imply any funding this year.

Local fund raising and use of District Designated Fund will  be initiated shortly and the intention is to spend this year on club/district funding.

16.06.2009
At the D2270 District Conference, our project was presented by President Elect Jan Johnsen and Hans Petter Schjelderup. The interest for our project at the conference was overwhelming and both clubs and our district indicated financial support and we are quite convinced that we will receive financial support outside the four initial clubs and related districts. During the conference we also had useful talks with Rotary Officials. Some important matters was clarified with RRFC Edrun Olaisen, Zone 16. 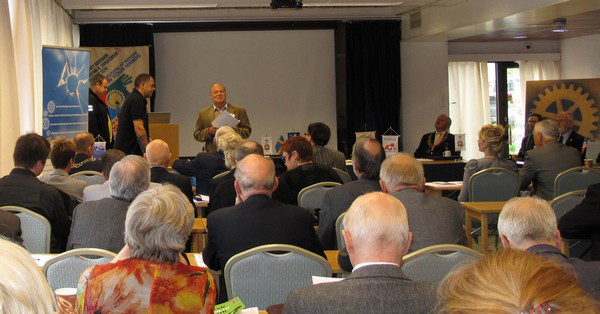 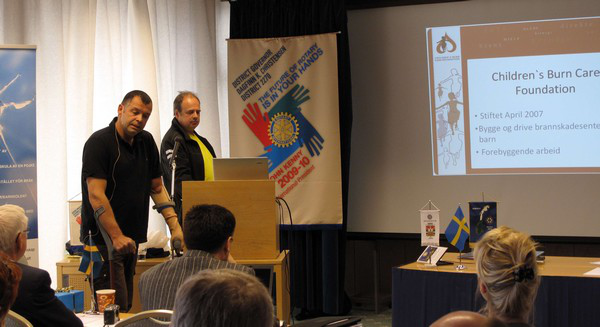 To sum up the latest progressions:

1. Harstad Syd RC will establish a bank account for open support from Rotary Clubs. These clubs will participate in a financial matter only and will be kept informed by email and website about the progression and financial status. There will be no limits on support (low or high)

3. Since this is a Competitive Grants project, Application deadline is August 1, and TRF will evaluate in October.